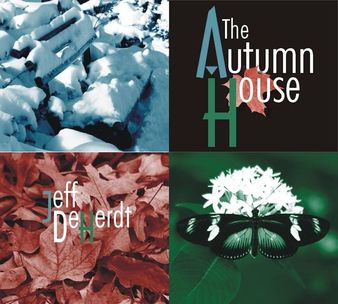 Jessica: for still putting up with my hobbies.

Julian: for laughing at nothing and everything.

Dave Weber: For not going insane at any point in this project.

All the musicians: For not rolling their eyes..well, most of the time. Also, for doing that third take even thought the first two were fine.

My family: for encouraging me to be a musician in their own unique way.

Jack Helsley: For helping me count to four on a 5/4|3/4 song and for having a sense of humor.

Harry Goodloe: For fleshing out all the drum parts and making them his own.

Mike Stricklin: For making the sax parts better than just the notes printed on a page.

Tom Clark: For making the sax parts have more heart than they had written in them.

Peter Kienle: For doing all those crazy solos and giving every song more rich texture.

Toni Bosten: You're vocals sound so good, I just had to record you  multiple times on these songs.

Dave Weber: For his engineering prowess, his knowledge of music in general and his ability to make things sound better behind my back. The recording wouldn't sound as good without you.

Steve Griffey: For helping me with the look and feel of this CD. You have a great eye for what you photograph. You even have two of them.

Bill Lancton, Wendy Reed, Jeff Reed, Darren Vincent, Larry Sauer, Lisa Sauce, Michael Beck, Terry Wilson, Greg Anderson, Dave Allee, Dave Andricik, Tony Fese, Sean Baker, Rob Dixon, Jennifer Kirk, Sam Withrow, Fred Withrow, Paul Holdman, Bryan Meyers and all the people I have worked with who have kept work coming my way: There would be no CD without you. There would be no music career without you.

Steve Allee and Claude Sifferlin: Who's early mentoring was priceless, and who I am still in awe of.

Dave Allee: For opening and maintaining one of the best Jazz Clubs in the Midwest

Dave Andricik: For one of the best hole-in-the-wall jazz bars in the midwest.

Darren Snider: For teaching me all about podcasting and new media (what little I know) and for showing up to a lot of my gigs.